Facing hostility in five former colonies over a stalled fight against extremists, President Emmanuel Macron has taken a harsh public stance. Few expect him to follow through. 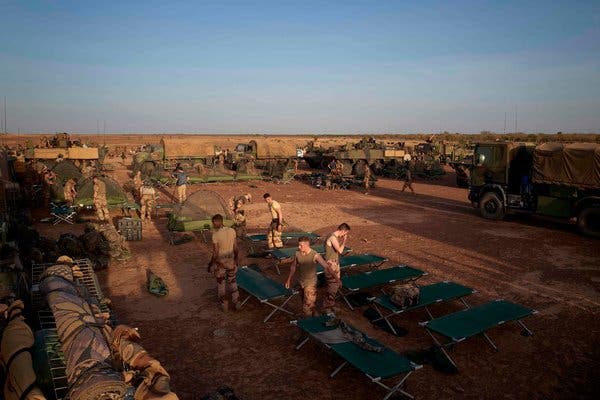 DAKAR, Senegal — France has called five African presidents to a meeting on Monday to disavow rising anti-French hostility in their countries, work out how to stop the rapid advance of armed Islamist extremists in their region and determine whether France will remain deeply engaged in that fight.

France could withdraw its 4,500 soldiers, President Emmanuel Macron has said, if the leaders of Mali, Niger, Burkina Faso, Chad and Mauritania do not answer questions to his satisfaction. That warning came as the United States also considers pulling troops from the region.

Many analysts say the French and Americans are making empty threats when they talk about leaving the Sahel, a semiarid area stretching more than 2,000 miles across West and Central Africa that is plagued by violent groups loosely affiliated with the Islamic State and Al Qaeda. But their warnings illustrate the allied nations’ frustration with extremist gains, and with one another.

France, the five countries’ former colonial ruler, initially intervened in 2013 to oust rebels and Islamist militants who had taken control of northern Mali in the wake of Libya’s descent into chaos. The militants regrouped, and now extremist-related violence is rising fast, doubling every year since 2015.

Mali suffers attack after attack. This month children were killed in Burkina Faso when their school bus ran over a roadside bomb, the latest in a long list of recent deadly episodes in that country. Seventy-one soldiers died last month in Niger’s deadliest ever attack on a military camp.

“The militants have got the upper hand,” said Héni Nsaibia, a researcher at the Armed Conflict Location and Event Data Project, a nonprofit organization. 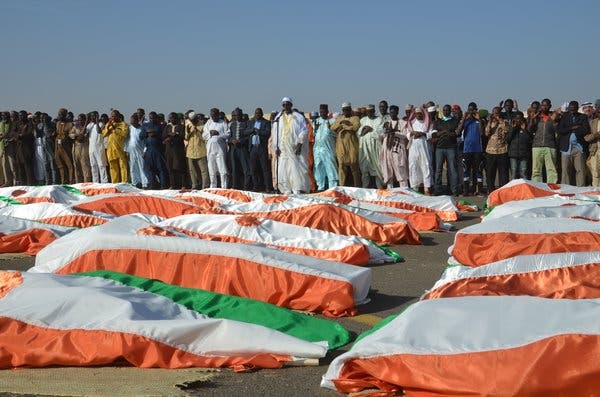 On the other side, the national armies fighting these militants — trained and funded by France, the United States and the European Union — have themselves committed grave atrocities. Ethnic militias, some with government support, carry out massacres, which have pushed more people into the militants’ arms.

However, many people in these countries increasingly blame the French.

Urban Malians are demanding the departure of Operation Barkhane, the French counterterrorism force, while protesters in the capital, Bamako, chant slogans against France and have burned the French flag.

Demonstrations have also taken place in neighboring Niger, where France and the United States have military bases, and in Burkina Faso, where their footprint is much lighter, but where violent attacks on civilians and soldiers have prompted France to intervene in the past year.

At the summit meeting on Monday in Pau, a town in southern France, Mr. Macron has said he will be asking the African nations, known as the G5 Sahel countries, to clarify their governments’ stances on both the French presence and those who oppose it.

“I can’t have French troops on the ground in the Sahel when there is ambiguity toward anti-French movements and sometimes comments made by politicians and ministers,” he said on a trip to Britain in early December, adding that whether France stayed would depend on the presidents’ responses to his concerns. 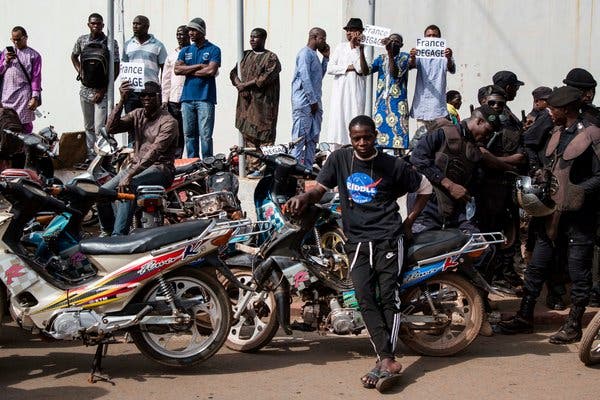 Most analysts think Mr. Macron is unlikely to make good on his threat to leave, and French officials say privately that they expect to be in the region indefinitely. Mr. Macron’s foreign minister, Jean-Yves Le Drian, is seen as being firmly invested in the French intervention, which he first drove as defense minister under the previous president, François Hollande.

French troops have been killed in Operation Barkhane, including 13 in a helicopter crash in November, and two who died in May while rescuing hostages held by militants. But the overall toll has not risen enough to spur demands from the French public that the soldiers be brought home.

If it happened, a French withdrawal would have a far greater impact than an American one, as France has a far greater presence in these nations.

Without Barkhane, countries would collapse in on themselves, causing uncontrolled terrorism and hugely increased migration to Europe, Gen. François Lecointre, head of France’s armed forces, told CNEWS, a television channel, in July.

But some experts say that these threats are much exaggerated, and that pulling out could force the region’s elite to find political and social solutions to a crisis entangled in disputes over access to land and resources.

“It’s they who have the solutions, not the French,” said Marc-Antoine Pérouse de Montclos, a French political scientist specializing in Africa.

How contrite the African leaders are willing to be with Mr. Macron is not just a matter of pride and posturing, but of retaining power. They will be carefully calibrating what they say publicly, and what they say to the French in private.

In effect, critics say France is helping shore up governments that lack confidence in their own armies, either doubting their ability to fight extremists or worrying about the possibility of military coups. Yet the presidents also have to satisfy voters unhappy with the presence of the former colonial power.

The president of Burkina Faso, Roch Marc Kaboré, hit back at Mr. Macron’s “summons” to Pau, where the official agenda includes seeking more international support for Sahel countries and reassessing France’s role there. Calling for mutual respect, Mr. Kaboré, who plans to run for re-election in November, said in a televised address last month that the “tone and the terms” used posed problems.

When France sent troops to Mali seven years ago, officials argued that if they did not intervene, Mali would become another Afghanistan. French ministers still present their fight in the region as a crucial piece of the global war against terrorism.

But none of the militant groups in the Sahel have ever carried out attacks outside the region and, with weak links to the international terrorist groups they pledge allegiance to, they seem more focused on local disputes.

Mr. Pérouse de Montclos, the French author of “Une Guerre Perdue: France Au Sahel” (“A Lost War: France in the Sahel”) said France would be better off getting out.

“The official narrative is that we are fighting terrorist groups, but actually we are protecting corrupt regimes, and some of them are quite authoritarian,” he said. “This foreign military presence is also used as a kind of a life insurance for these regimes.”

Mr. Macron should use the opportunity to announce the end of a mission that was never meant to last this long, Mr. Pérouse de Montclos said, forcing the Sahel leaders to handle the situation.

At the moment, however, these leaders have other priorities. Burkinabe politicians are “all focused on the election” rather than protecting citizens from further suffering, said Mahamoudou Savadogo, a researcher working on violent extremism in the Sahel.

The human cost of failing to resolve the crisis is heavy. In Burkina Faso, more than half a million people have fled their homes because of the violence.

A report released last week by Human Rights Watch documented Islamist groups’ killing of more than 250 civilians in nine months there, including several dozen in a camp in Arbinda, where one witness survived by hiding behind a clay stove while 22 of her neighbors were killed.

“Two terrorists opened my door but didn’t see me. Then they entered my neighbor’s hut, killing her,” the report quoted her as saying. “They argued about whether to kill her baby … but eventually shot him.”